H.E the Ambassador of Nigeria to the United Nations, Mr. Tijjani Muhammad-Bande, spoke to UN correspondents after his election this afternoon, 4 June, as the next GA President.

Mr. Muhammad-Bande will begin his tenure in September replacing the current GA President, Ms. María Fernanda Espinosa. He was elected by acclamation as the candidate of the African countries for the 2019-2010 GA session.

The President-elect, a former University Professor, answered questions on multilateralism, gender equality, violence and extremism, climate change, UN reform and the 2030 Agenda among other topics.

He was introduced by the Spokesperson for the President of the General Assembly, Ms. Monica Villela Grayley.

President-elect Muhammad-Bande was accompanied by a delegation from Nigeria, his home country.

END_OF_DOCUMENT_TOKEN_TO_BE_REPLACED 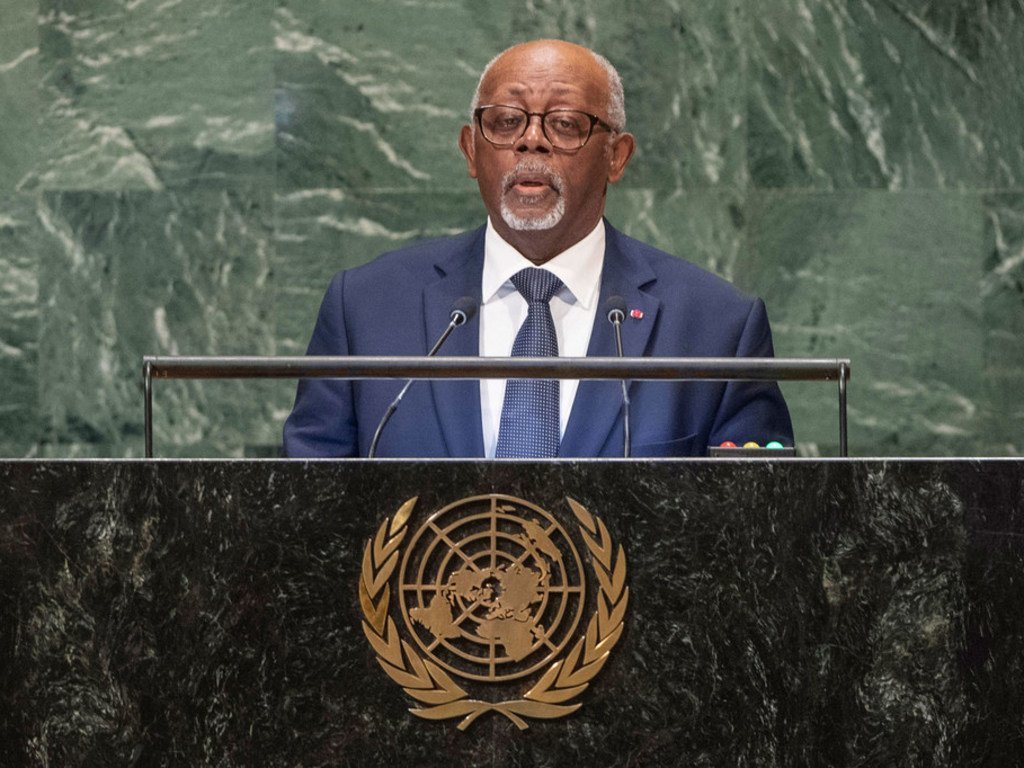 The theme for the general debate this year is “Making the United Nations relevant to all people: global leadership and shared responsibilities for peaceful, equitable and sustainable societies”; it is also the theme of the 73rd session of the General Assembly.

Now there are more ways than ever to follow the action ➡️ https://bit.ly/2QNjasK

When is your Head of State speaking?

No single actor can fund a sustainable future. We need everyone.

On 24 September, global leaders will convene at #UNGA for the Secretary-General’s High-level Meeting on Financing the 2030 Agenda to discuss financial policies that put sustainable development at the centre of a strong global economy.

The General Assembly elected María Fernanda Espinosa Garcés on June 5, 2018 as President of its seventy-third session — making her the fourth woman to helm the 193-member organ in its more than seven-decades-long history.

Speaking at the UN Headquarters, in New York, after her election in June, she promised to lead the Assembly in a way that strengthens multilateralism and better delivers on its commitments. On her priorities for the 73rd Session, she said “I think that we are really living in a very troubled environment, and I think it is very important that we really work towards the strengthening of the multilateral system and the revitalization of the United Nations; that we work hard to deliver better”.

She also added “to use an acronym that I have come up with, the “D.A.R.E” acronym, meaning “Delivery, Accountability, Relevance and Efficiency. “The D.A.R.E acronym is going to guide my work as President of the General Assembly during the 73rd Session. So, revitalize and boost multilateralism, revitalize the General Assembly, revitalize the UN system. I think that we all need, and we will all benefit from, a strong rules-based international system”. She added.

H.E. Ms. Espinosa has chosen the theme “Making the United Nations Relevant to All People: Global Leadership and Shared Responsibilities for Peaceful, Equitable and Sustainable Societies”.

The 73rd Session of the UN General Assembly opened in New York today.

Statistics from the International Organization for Migration (IOM) indicate that 1700 Cameroon migrants are concerned by the merchandising of black Africans in the Maghreb countries. Moreover, despite the growing hostility, illegality and insecurity encountered by migrants, global statistics reveal that 258 million migrants roam the world in search of better living conditions. This was disclosed during the official ceremony co-organised to mark the 2017 International Migrants Day on 18 December 2017, at MINREX by the UN System on the theme; “Cross-border migration: Stakes and challenges for Cameroon”. In attendance was Mrs. Allegra Baiocchi; UN Resident Coordinator in Cameroon.

Mr. Boubacar Seybou; Head of Mission of IOM Cameroon harped on the role of the international community to show solidarity as he emphasised that “Migrants are victims of human trafficking, separated from their families and maltreated. You are a migrant, I am a migrant, we are migrants, together let us take action for migrants wherever and whoever they are, making it a beneficial opportunity for migrants and the countries that welcome them so that they may live well even beyond their borders”.

UNIC’s NIO; Jean Njita presented the storyline and projected the documentary “Wallah Je te jure”, a 24 mins film produced by the IOM. This tells the stories of men and women travelling along West African migration routes to Italy, Senegal’s rural villages, Niger’s bus stations and “ghettos” full of traffickers, Italian squares and houses will be backdrops of these courageous trips, which often end in tragedy. No matter the cost, the goal to reach Europe will be achieved, “Wallah”. But there are those who tired from the journey, turn back home.

Mr. Abou Omar; Director of cooperation with the Islamic world at Ministry of External Relations reiterated government’s commitment in creating a conduisive economic, social and cultural relationships with other countries for a better protection of their citizens who migrate, he cited an example; the Franco-Cameroon convention for social security.

Conference Debate on “Cross-border migration: Stakes and challenges for Cameroon”

Moderated by Mr Yves Tsala of the NGO “Solutions aux migrations clandestine (SMIC)”, the panel discussion had as panelists;

The three panelists disclosed that migration in itself was not a bad thing, but illegal migration is. They advised any individual embarking on a journey to obtain the legal documents and avoid the risks and dangers involved in illegal migration. They also insisted on the assistance of the government and its partners such as IOM, to returnees from this dangerous adventure across the Sahara desert (some were present in the hall).

Discussions continued with rich exchanges between panelists and participants, with questions such as;

Dr. Boubacar Seybou insisted that, migrants must not take boats to migrate, it is necessary to migrate in a legal way and this way should not be reserved only to elites but to everyone.

UNIC Yaounde provided information kits comprised of; UNSG’s message on the migrants day (French and English), the storyline of the movie “Wallah je te jure”, and the Africa Renewal edition of December 2016 – March 2017 with a special on “Migrants risk all for better lives”. This kit with specific statistics for Africa was distributed to all participants.

Today’s Summit represents a breakthrough in our collective efforts to address the challenges of human mobility. More people than ever are on the move. Some flee war; others seek opportunity.
Refugees and migrants are not to be seen a burden; they offer great potential, if only we unlock it. We must place the human rights of all refugees and migrants at the heart of our commitments. When we translate the New York Declaration which we adopt here today into reality: More children can attend school.
More workers can securely seek jobs abroad, instead of being at the mercy of criminal smugglers. And more people will have real choices about whether to move once we end conflict, sustain peace and increase opportunities at home.
The 2030 Agenda for Sustainable Development advances those goals. The Declaration we will adopt today rallies all partners around collective commitments:
To protect the human rights of all refugees and migrants, regardless of their status.
To increase support for the hardest-hit countries.
To assist despairing people in protracted crises.
To ensure that children get an education.
To improve search and rescue operations.
And to boost humanitarian funding and resettlement of refugees.

Also today, we will formally bring the International Organization for Migration, IOM, into the United Nations system. This will further strengthen our collective response. Congratulation to IOM! We must change the way we talk about refugees and migrants.  And we must talk with them.  Our words and dialogue matter. That is why today, the United Nations is launching a new campaign called “Together – Respect, Safety and Dignity for All.” Acting together, we can respond to rising xenophobia and turn fear into hope.

I call on world leaders to join this campaign and commit together to upholding the rights and dignity of everyone forced by circumstance to flee their homes in search of a better life. This summit shows that we can find common ground. But the summit will have real meaning only if we all honour the promises made here today. With courageous actions to implement the New York Declaration, we will ensure that no refugee or migrant is left behind.

Thank you for your strong commitment and leadership.

For the first time, world leaders are coming together at the United Nations to address issues affecting both refugees and migrants!

The UN Summit for Refugees and Migrants on 19 September is an historic opportunity for the world to agree on a better response to large movements of refugees and migrants.

Read more about the #UN4RefugeesMigrants Summit at;